Just before we left for a Memorial Day mini-vacation, I was speaking to a business owner whose company did $1.5 million revenue in 2020.  He is planning for his exit within the next five to six years, by which time he reckoned he would achieve organic growth that would result in his revenues being around $4 million.  He thought he could maintain his gross margins during the period. I asked him how long it took him to go from standing still to achieving his present $1.5 million of annual revenue.  Answer:  It took over 10 years and that included the purchase of $250K of revenue when he purchased a small competitor early in his company’s history.

After that call we left for our long-overdue family visit in Fort Collins.  One of our plans included a visit to Rocky Mountain National Park for a day of sightseeing. (Reservation required!)  We took the Scenic Loop from Estes Park over the Continental Divide through to Grand Lake. 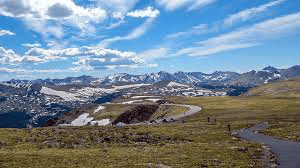 The Trail Ridge Road drive over the mountain includes alpine tundra where conditions are similar to the Arctic.  The loop usually opens around Memorial Day, since this is the earliest time the roads are expected to be clear after being closed for the winter.  We drove through 12 feet of snow on either side of the road to get to the top where there is a thrilling “pullover” in the alpine tundra.  In addition to marmots, coyotes, and bighorn sheep, we were able to see sweeping vistas miles away into Wyoming and down to the plains from our elevation at 12,183 feet.  It’s like looking down to the ground from a plane, seeing tiny cars and winding rivers.  Nothing looks very far away until you get some perspective by comparing the cars to the mountains.

This thought reminded me of the business owner with the 5-year $4 million revenue goal.  He genuinely thought that his goals were reasonable based on his experience of starting with nothing and getting to the $1.5 mil revenue.   When I showed him that he was talking about a compounded increase every year of 20% growth, (a growth rate he had not enjoyed previously other than through an acquisition) he realized that his goals might be further away than they appeared.  When he compared more than doubling his company size in five years from purely organic growth (no acquisitions) to organic growth, he realized that his goal might be further away than he originally thought.  We talked a bit about the difficulty of continuously achieving 20% growth without acquisitions and about the major challenges that arise when you are growing a company that fast.  More than doubling the number of clients and employees (if he could find them) in that time would require lots of luck in addition to skill.

Before we ended our call, he decided he wanted to think through some scenarios about growth and margins and calculate projected results for those for the five years ahead.  Having additional clarity about what his goals are and how he might achieve them using various strategies will result in a plan (with options!) for his existing operation to build and enhance their revenue, margin, and infrastructure.

Do you have a “mountain” you’d like to conquer in the near future?  Is it as close as you think it is?  If you’d like to discuss your company’s goals including readiness for sale, selling, or buying a company, or if you would like help with an existing acquisition, please let us know. In the meantime, if you have questions or comments, I can be reached anytime via email: [email protected] or phone at: 224-688-8838. We’re here to help you Harvest Your Potential.

has more than 25 years of experience in strategy, operations, mergers and acquisitions and delivering business-to-business client solutions. Her areas of expertise include managing operations for profitable growth, organizational design and strategy activation. She brings a wealth of experience through her work in evaluating, valuing and purchasing over 30 companies, leading company-wide cultural and business integration projects and consolidating best practices among business processes and corresponding computing systems. Read Full Bio